I came back from San Francisco (WWDC) a few days ago and with me I brought a silver cube stipulating that TextMate 1.5.2 won the Apple Design Award for Best Mac OS X Developer Tool 2006.

Todd Peterson took the picture shown below where I am on stage and have just received the award (click to enlarge.) 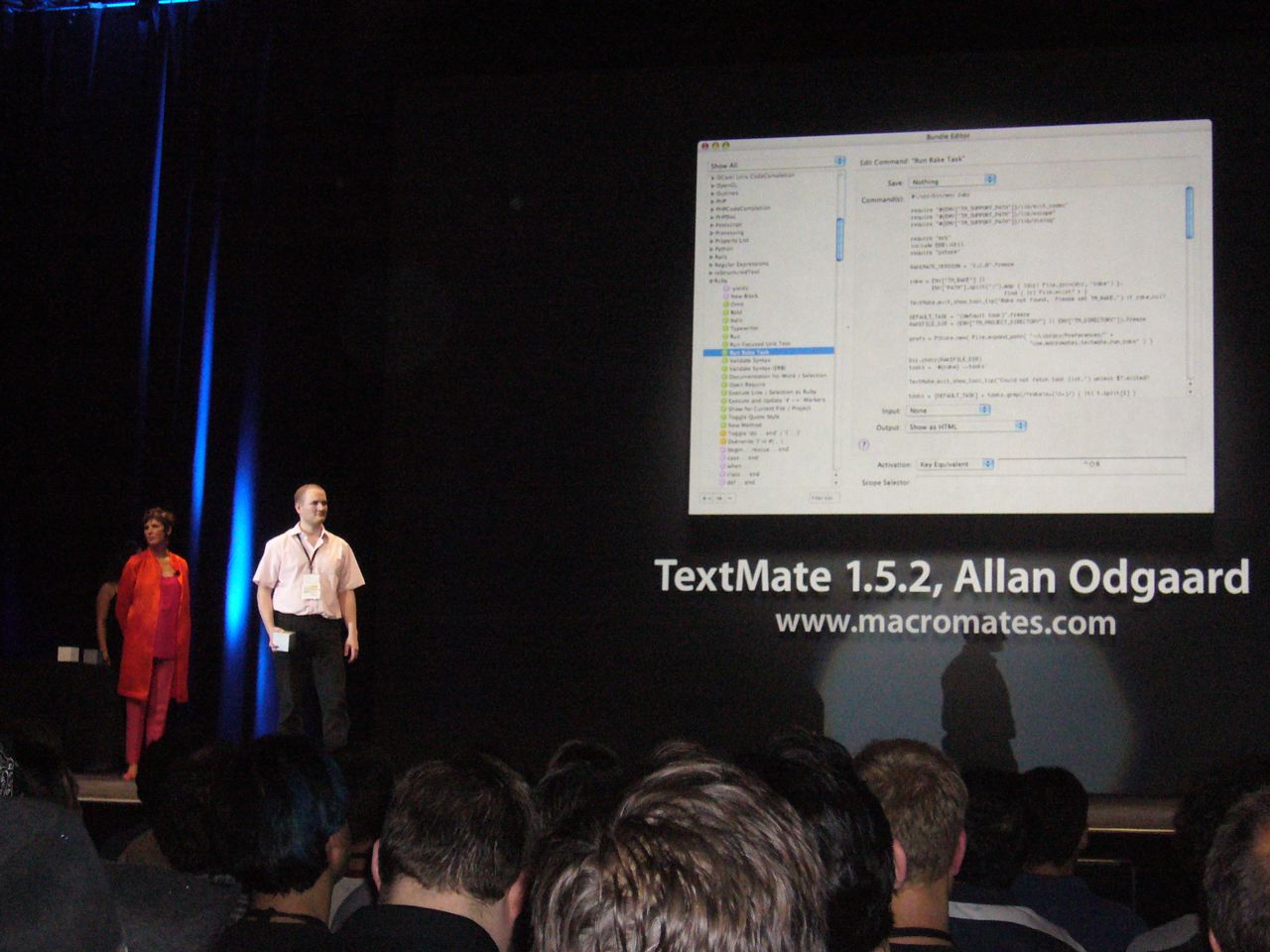 Thanks a lot to all who have congratulated me directly or indirectly and of course also many thanks to Apple for hosting this great show and for recognizing my outstanding and innovative work on TextMate — their words, not mine :)

This was a week I will not soon forget, I met a ton of like-minded developers, many of whom I only knew from their work, so it was nice to finally put a face on them.

I didn’t bring a camera myself, but John Gruber snapped this paparazzi of me outside Gordon Biersch. The two guys I am talking with are from Yahoo!’s Mac team, and no, the guy getting sick is not Mr. Siegel.

I also got a chance to experience the american food culture, if you are wondering, this is sticks of cheese which are deep fried. If I look a little red on the picture it is because I was out sightseeing the day before without sunscreen, and as an alpha geek I have no skin pigment whatsoever.

I’ll be happy to see you holding next year’s award for TextMate 2.x …

I agree with Daniel : next year you will win 2 others ada : best tools for developers AND best app overall :-)

You received the Award for a really brilliant tool, that for sure deservs it! Well done, congrats!

Congratulations! As others have already said, it is very well deserved.

Congratulations Alan. As everyone has said, well deserved and long overdue!

Congratulations Allan, TextMate is a great piece of software and I can’t image working without it now. I’m glad you’re getting the credit you deserve.

I was waiting for this post to say like everyone says: congrats! It sure is well deserved.

Congratulations on your success! More to follow I’m sure!

Congrats! but John Gruber is a notorious BBEdit user…perhaps you had the chance to conert him :)

Congradulations on the award !

TextMate is an awesome mixture of .app and .tmbundle goodness and I enjoy it every single day.

When will we see the Apple Design Awards logo on the site ? :)

Congratulations! You and Textmate definitely deserve this award.

I don’t know what I’d do without Textmate anymore!

I hate to sound like a broken record… but I will. Congratulations on a job well done!

I have been using TextMate for almost a year now and I couldn’t be happier.

PS: Thank you to all of the bundle developers too! The app wouldn’t be the same without you guys.

Going from a £393 copy of Dreamweaver to a €30 copy of Textmate has been the best software upgrade I’ve made ever! Congrats :)

Top stuff! Congratulations. I’m glad Apple has recognised TextMate as the excellent developer tool that it is. It’s my favourite developer tool in years and years. Writing code (or any text for that matter) is very enjoyable with TextMate.

Congratulations, I discovered textmate only 2 weeks ago and it’s worth a lot more than it costs. Keep on the good work.

Deep fried cheese? That’s diet food here in America. If you want to indulge, you should try our deep fried Twinkies or the Monster Thickburger.

Deep fried cheese? That’s diet food here in America. If you want to indulge, you should try our deep fried Twinkies or the Monster Thickburger.

Well done on the award Alan you really deserved it! I would love to know what the future holds for Textmate, what new features are planned for this exciting application! Any news Alan?

Congratulations! TextMate is a godsend tool and I’ve found its extensibility very welcome. I’m glad you enjoyed your time in California and remember, there is more to American food than just fried cheese! I’m happy that you won; your software is amazing and developer-friendly!

Textmate is an essential application in my toolchain! Thanks and congrats!

Congrats, Allan. As we all know here, it’s well deserved! Keep up the good work, and, please, don’t sell Macromates to Yahoo! ;)

Investing 39 euros on TextMate has no doubt been one of the best decisions that I’ve ever made software-wise. Not only is it the best text editor I’ve ever used – on any platform –, but it has also completely changed the way that I work. To put it simply: TM is Good Karma :)

Most useful software I own! Congrats Allan.

Just wanted to add that I’ve noticed “mate .” is one of my top ten commands in iTerm now; I’m considering nominating it for the “alias m” award. ;-)

Wow! what a excellent editor! However, I’m a CJK user and I hope the TextMate supports the wide-char display. My Chinese characters are all identified only 1-byte widde :-(

Congrats Allan, Textmate is my every day editor tool and I couldn’t be happier with it!

You sure deserved the award!

Argh I bet there are many people jealous on you. I must admit that I am one of them.

Congrats with the nice award :-)

Allan, it was good to meet you at the conference (so I already said my congratulations :-).

With regards to the food, I was surprised too. San Francisco is a paradise when it comes to food and restaurants, but it can be hard to find. Many places in downtown have this “Taco Town” feel:

Alan, let me add my congratulations on a well-deserved honor. I’m not just hugely pleased with my copy of TextMate, and the improvements it’s making to my coding productivity. I’m also quite proud to have one of the first 100 licenses issued (#57). TextMate has been making a difference for me since almost the very beginning.

Next up: Let’s get you that Eddy Award!

Congratulations. I have been using Textmate for almost everything, Java, Python, C. It works great for all of those.

Congrats… I’ve never taken to a new tool so quickly. As much as I thought I loved BBEdit, I haven’t used it in months.

Allan, hearty congratulations. You have given us an excellent tool. Thanks.

Congratulations for the Award.

As a windows switcher and having TextMate at my side only for a couple of months, feels like having a reliable companion at my side. One that you can count on, when you need it. It is the most important App to me on OS-X. I wouldn’t like to miss it.

Not too surprised ;) Nothing seems close to TextMate. Thanks for all of your hard and innovative work.

congrats Allan. Now that Apple has acknowledged TextMate, does this mean that we will see better XCode integration?

Congrats. I’m almost done with my trial period and will be registering in a matter of days. The move from Emacs has been painless. TextMate for some reason brings back memories from my CygnusEd days on the Amiga. I guess it’s the ease of use and precise functionality.

Please don’t turn into a toaster.

Great! With a portable mac, textmate and ruby on rails I feel complete.

Allan, please go there : http://trophee.macgeneration.com/registration you will win !!!

CONGRATS! You guys deserve it! You have one of the most well thought out apps on my Mac! I wish everyone developed apps like yours. Well done!